Syllabus (Topic cover in this section): 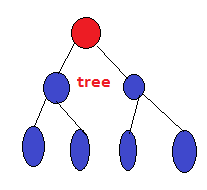 A tree is a connected graph that contains no cycle or circuit. It is a simple graph having no self-loop or parallel edges. A tree contains a finite set of elements which are called vertices or nodes.

A forest is a collection of disjoint trees. It is an undirected, disconnected, acyclic graph.

A binary tree is a tree in which the degree of every node is less than or equal to 2. A tree consisting of no nodes is also a binary tree.

A binary tree is said to be a complete binary tree if all its levels, except the last, have a maximum number of possible nodes and if all the nodes at the last level appear as far left as possible.

A traversal of a tree is a process in which each vertex is visited exactly once in a certain manner. For a binary tree we have three types of traversal:

Vertex visited in the following order:

What is a binary search tree?

In a binary tree, every node can have a maximum of two children but there is no need to maintain the order of nodes basing on their values. In a binary tree, the elements are arranged in the order they arrive at the tree from top to bottom and left to right.A binary tree has the following time complexities…

Operations on a Binary Search Tree

The operations are performed on a binary search tree are as follows:

Step 1 – Read the search element from the user.

Step 2 – Compare the search element with the value of the root node in the tree.

Step 3 – If both are matched, then display “Given node is found!!!” and terminate the function

Step 4 – If both are not matched, then check whether the search element is smaller or larger than that node value.

Step 5 – If the search element is smaller, then continue the search process in the left subtree.

Step 6- If the search element is larger, then continue the search process in the right subtree.

Step 8 – If we reach the node having the value equal to the search value then display “Element is found” and terminate the function.

Step 9 – If we reach the leaf node and if it is also not matched with the search element, then display “Element is not found” and terminate the function.

Difference between BFS and DFS

Breadth-First  Search is an algorithm for traversing or searching tree or graph data structure.
It starts at the tree root and explores the neighbor node first, before moving to the next level neighbors.

Depth-first search (DFS) is algorithmic for traversing or searching tree or graph data structure. One starts at the root (selecting some arbitrary node as the root in the case of a graph ) and explores as for as possible along each branch before backtracking.

A graph is a non-linear data structure consisting of nodes and edges. A graph consists of two sets as follows:
1. Set V of nodes or point or vertices of graph G.
2. Set E of ordered or unordered pair of distinct edges of G.
We denote such a Graph by G(V, E) and set vertices as V(G) and set edges as E(G).
For example: 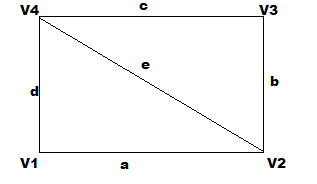 If G is finite then a number of vertices in G denoted by V(G) are called an order of G.

The number of edges denoted by E(G) in a finite graph G is called the size of G.

Difference between Directed and Undirected Graph

Directed Graph: A directed graph is a set of vertices (nodes) connected by edges, with each node having a direction associated with it. Edges are usually represented by arrows pointing in the direction the graph can be traversed.

In other words, A  Graph G(V, E) is said to be a directed graph or digraph if each edge e belongs to E is associated with an ordered pair of vertices as shown below: