A set which consist finite number of elements is called finite set.

A set which consist infinite number of elements is called infinite Set.

A set which has consist only one element is called singleton set.

A  set which contains no element at all is called null set.
It is also known as empty or void set.
It is denoted by {} or Φ.

If A is subset of a set B , then B is called superset of A.

Any subset A is said to be proper subset of another set B, if there is at least one element of B which does not belong to A, i.e, if A⊆B but A is not equal to B.
It is denoted by A⊂B.

In many applications of set , All the sets under consideration are considered as subsets of one particular set.
This set is called universal set .
It is denotedby U.

Let A and B be two sets , if there is no common element between A and B, then they are said to be Disjoint set.

Types of Operation on SETs:-

1. UNION:- Let A and B be two Sets, then the union of set A and B is a set that contains those element that are either in A or B or in both .It is denoted by AUB.

2. INTERSECTION:- Let  A and B be two sets , then the intersection of A and B is a set that contain those element which are common to both A and B . It is denoted by A∩B  and is read as ‘A intersection B’.

3.COMPLEMENT:- Let U be the universal set and A be any subset of U, then complement of A is set containing elements of U which do not belong to A.  It is denoted by  Ac

4. DIFFERENCE OF SETS:- Let A and B be two sets . Then difference of A and B is a set of all those elements which belong to A but do not belong to B and it is denoted by A-B.

Relation in set :  Let A and B be two non empty sets, then R is relation From A to B if R is subset of A x B and is set of ordered pair (a,b) where  a belongs A and b belongs to B . It is denoted by aRb and read as ” a is related to b by R”. 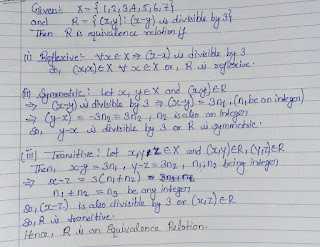 Domain and co-domain  of function:-

Let f be a function from X to Y . Then set X is called domain of function f and Y is called co-domain function f.

1. One to One Funtion (Injective Function or injection)
Let f:X tends to Y then f is called one-to-one function if for distinct element of X there are distinct image in Y i.e., f is one-to-one if
f(x1)=f(x2) implies x1=x2 for all x1,x2, belongs to X 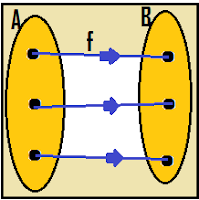 2. Onto Function (Surjection or Surjective function)
Let f:X tends to Y then f is called onto function iff for every element y belongs Y there is an element x belongs to X with f(x)=y or f is onto if Range (f)=Y. 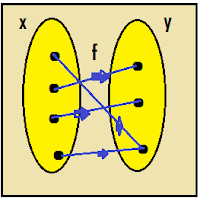 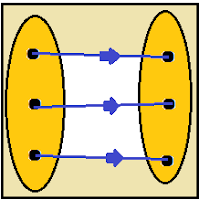 4. Many One function
A function which is not one-to-one is called many one function i.e., two or more elements in domain have same image in co-domain i.e.,
If f:X tends to Y then f(x1)=f(x2) implies x1 not equal to x2. 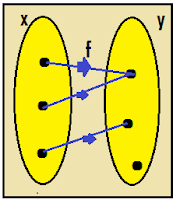