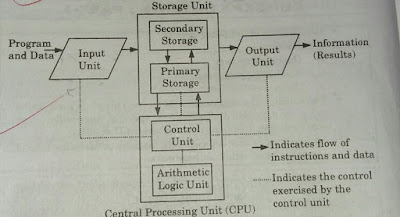 Ans. Digital Computer is an electronic computer in which the input is discrete rather than continuous of number , consisting of combination of number ,letter and other characters written in an appropriate programming language and represented internally in binary notation.
The main functional and unit/component of a digital Computer are:

A. The CPU  is the brain of a computer system.
B. this unit takes the data from  the input input devices and processes  it according to the set of instructions and program.
C. The output of processing of the data is directed to the output devices for use in the outside world.
D. CPU has two major part called ALU and Control Unit.
(i) Arithmetic Logic Unit(ALU):
1. ALU is responsible for carrying out following operations :
a.) Arithmetic operation on data by adding , subtracting , multiply and dividing one set with another.
b.) Logical operations by using AND, OR, NOT and exclusive -OR operation which is done by analyzing and evaluating data.
2. ALU of a computer system is the place where actual execution  of instructions takes place during processing operation.
(ii)Control Unit(CU):
1.This unit is mainly used for generating the electronic control signals for the synchronization of various opration .
2.All the releted functions for program execution such as memory read , memory write, I/O read, I/O write , execution of instructions , are ssynchronized  through the control signal generated by by the control unit.
3. It manages and control all the operations of the computer .

An  output unit performs following functions:
A.) It accepts the result produced by a computer , which are in coaded form .
B.)It converts these coaded results to acceptable (readable ) form.
C.)It supplies the converted result to outside world.

A storage unit hold (stores):
A.)Data and instructions required for processing ( received from input devices ).
B.)Intermediate results of processing .
C.)Results for output , before they are released to an output devices.