What is a microprocessor?

A microprocessor is the most important unit within a computer system and is responsible for processing the unique set of instructions and processes.
A microprocessor is designed to execute logical and computational tasks with typical operations such as addition/subtraction, interprocess and device communication, input/output management, etc.
A microprocessor is composed of integrated circuits that hold thousands of transistors; exactly how many depends on its relative computing power.

Microprocessor characteristics are as follows:

2. Second Generation: By the late 1970s, enough transistors were available on the IC to usher in the second generation of microprocessor sophistication: 16-bit arithmetic and pipelined instruction processing.

Motorola’s MC68000 microprocessor, introduced in 1979, is an example. Another example is Intel’s 8080. This generation is defined by overlapped fetch, decode, and execute steps (Computer 1996). As the first instruction is processed in the execution unit, the second instruction is decoded and the third instruction is fetched.

The distinction between the first and second-generation devices was primarily the use of newer semiconductor technology to fabricate the chips. This new technology resulted in a five-fold increase in instruction, execution, speed, and higher chip densities.

3. Third Generation: The third generation, introduced in 1978, was represented by Intel’s 8086 and the Zilog Z8000, which were 16-bit processors with minicomputer-like performance. The third generation came about as IC transistor counts approached 250,000.

Motorola’s MC68020, for example, incorporated an on-chip cache for the first time and the depth of the pipeline increased to five or more stages.

This generation of microprocessors was different from the previous ones in that all major workstation manufacturers began developing their own RISC-based microprocessor architectures (Computer, 1996).

Leading-edge microprocessors such as Intel’s 80960CA and Motorola’s 88100 could issue and retire more than one instruction per clock cycle.

5. Fifth Generation: Microprocessors in their fifth generation, employed decoupled superscalar processing, and their design soon surpassed 10 million transistors. In this generation, PCs are a low-margin, high-volume-business dominated by a single microprocessor.

The main sample operations and instruction sets of a microprocessor include:
ARITHMETIC LOGIC UNIT: Do addition, subtraction, multiplication, and division) and logic operations (AND, OR, and XOR) on data stored in its registers
INPUT AND OUTPUT: accept input from devices, such as a mouse, keyboard, or scanner
MEMORY: store and access binary instructions in memory, page file
CONTROL UNIT: fetch execute routine using ALU & memory registers
INFORMATION EXCHANGE: communicate between peripherals using a system bus.
https://www.rtsall.com/2020/03/microprocessor-notes-4th-semester-pin.htmlhttps://www.rtsall.com/2020/02/operating-system-notes-4th-semester-cse-aktu.html

An interrupt is a mechanism by which an I/O or instruction can suspend the normal execution of the processor and get itself serviced. Generally, a particular task is assigned to that interrupt signal. In the microprocessor-based system, the interrupts are used for data transfer between the peripheral devices and the microprocessor.

A small program or a routine that when executed services the corresponding interrupting source is called as an ISR.

There are two types of interrupts used in the 8085 Microprocessor:

For these devices and for these reasons serial I/O mode is used. In serial I/O mode transfer a single bit of data on a single line at a time. For serial I/O data transmission mode, 8-bit parallel word is converted to a stream of eight serial bit using a parallel-to-serial converter. Similarly, in serial reception of data, the microprocessor receives a stream of 8-bit one by one which are then converted to 8- bit parallel word using serial-to-parallel converter. For this purpose data transfer schemes of 8085 microprocessor are introduced. 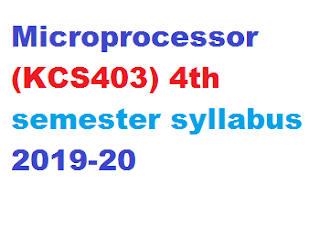